Thursday June 13 was my first day to see a bit of Recife and to visit the Arena Pernambuco a first time. The area where I am staying is called Piedada, close to Boa Viagem, the tourist area in Recife. When I walk out of the house it takes me 5 minutes to get to the beach. On my first sightseeing I saw anything possible. Streets full of cars and busses, but also a lot of water. It rained all day. Not just a few drops, no real heavy rainfalls. Just a few 100 meters from my place there are no real streets anymore, and during such rainfalls there were small rivers and lakes in between the houses. But the people from Recife knew what happens here; it rains one day, and the next day it will be sunny. And so it was, Friday was sunny and hot. By the way, on the streets U also see dogs, pigs and horses! 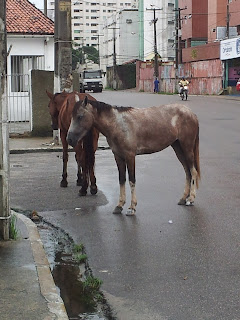 Ronaldo took me to the train station “Prazeres”, from which I could go for 1.6 Real to Joana Bezerra. From there I proceeded, also by train to Rodoviaria, which is by bus about 10 minutes from the Arena. Upon arrival at the Arena I went for my accreditation (with a name change of course…Hubertus instead of Bert…), got my uniform and I shortly visited the Media Centre (SMC), the place to work for the next 10 days. Around and in the Arena there was still a lot of construction work going on. Difficult to imagine that there will be a game in this Arena on sunday... On my way home I made a walk from the metro station through my area, getting a bit a feeling where I am and what is around over here. Still totally tired from my travel I went to bed quite early.

Friday morning shortly before 7am I was waiting for a bus to get to the “Prazeres”. Finally, after 25 minutes, a bus turned up. I don’t wanna bother U with the quality of this bus and it’s driver…but it was not really good..


Ilana joined me to the Arena (thanks!), and after having stated my presence I went for my first shift to the Media Centre. I was allocated to work at the Welcome Desk. Work…be present, don’t think I saw 1 journalist.


Lunch is served in the volunteer centre, a centre which is well equipped and quite a difference to my experiences from South Africa. After lunch we had a meeting with 2 FMO (FIFA Media Officers), out of which we got some imagination about the Media work. And we got a “real” job. Some of us went to rehearse in the Arena, I got allocated to a group who is going to do the support at the Media tribune. As our first job we were asked to organize the tickets for the Media people. Quite a job which took us all afternoon ;-) 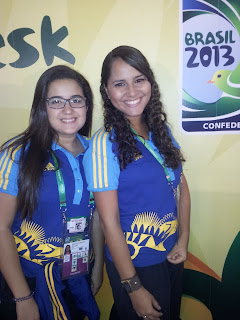 At the end of my shift, Sérgio offered to take me to the train station at the airport, at which I agreed to meet with Ronaldo. It took us more than 2 hours for a distance of maybe 14 km…. Due to a strike of the busdrivers almost all roads and highways in and around Recife were full of traffic jam.


After Ronaldo finished his basketball game we went to the market, Feria Boa Viagem, a nice and interesting place with lot of good people around. Boa Viagem is an area with many hotels, flats, more or less good roads. Contradictionary to the houses U see out of the train on Ur way to the Arena. The end of my first “working day” at Recife! 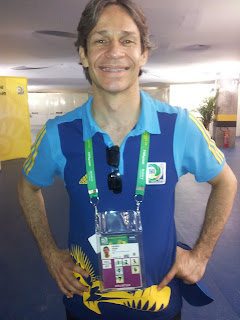