The Saturday morning started early, at about 6am (11am in Switzerland and SA!), trying to get an update on my mails, pictures, blog, Facebook and so on. And with some more mosquito bites. Unfortunately my internet connection over here is very slow (VIVO), so I actually do only upload a few pictures, the majority will then be uploaded and published as soon as I am back home.
After some short talks and a breakfast with Ronaldo he took me for a sightseeing tour through Recife, by car. In my area, Piedade, there are quite some hotels situated, directly at the side of the beach, a beach however which is from this side not really accessible.
From Piedade we proceeded to Boa Viagem, a much more modern part of Recife with lots of newer buildings, also quite some hotels, 2 rivers which are floating in Recife, Capibaribe and Beberibe,  and especially a very long beach. A beach full of people, places to be, sport possibilities, but there were not really people in the sea (Atlantic Ocean)! Warnings are around for sharks; have not yet checked whether they are really around, will for sure still look for them this week.
Our tour took me to several nice areas and buildings in Recife, until we made a stop in Olinda, a village which was founded in 1537. The settlement of Recife and it’s harbour may have begun at about the same time. In Recife, in 1630, there were only about 60 houses, together with warehouses to store goods. When people became aware of a Dutch (!) invasion, the settlement was surrounded by a palisade. A Dutch engraving of 1630 depicts the conquests of the villages of Olinda and Recife. With the conquest of Recife in 1630, a natural growth of this settlement took place. The palisade of 1629 was pulled down and the residential area extended north towards the isthmus. The Dutch defended the area with 2 bulwarks on either site of the entrance gate. One was made of stone and the other of mud and clay. The Recife of 1630 with 40 houses was transformed into the Recife of 1644, when a palisade was again constructed around the city on the outbreak of the Pernambuco Insurrection.
The houses in Olinda do have an equal style like in Amsterdam, they are just not that small. Carnival is celebrated to it’s utmost in this city, thousands of people gather together in a friendly and enjoyable atmosphere, the Central do Carnaval is actually renovated. Many big “Herenhuizen” complete the Dutch style in Olinda.
Ronaldo had to pick up his volunteer T-Shirt in Olinda. He is a “BV”, a “Brasil Voluntario”. These are so called “government volunteers” and will be present at the airport and in Shopping Recife. Next to an orange T-Shirt (of a minor quality by the way…it’s a pity that there is a big difference between the FIFA volunteers and the BV’s), they get some information about Recife and about the Confederations Cup, also to be used as information for the tourists. Unfortunately this information is only in Portuguese. Basically one big problem of this city and the organisations around the Confederations Cup. Many people do not speak English, even police, security people, taxi drivers and so on are not able to have a short talk in English.
To my big surprise I met Thamy in Olinda. Together with her mom she was also collecting her BV T-Shirt. At Thamy’s place a volunteer from Argentina is staying who will be working within Spectator Services. Emi arrived on Friday. And already in the first evening she was mugged by 2 young boys who stole her purse with her camera in it. Yes, in the evening- and night- hours it is dangerous in Recife and everybody warns U not to walk alone through any of the streets over here. 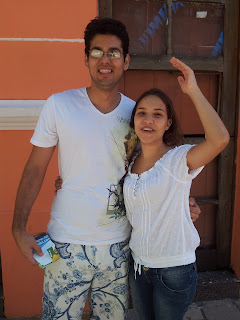 Shortly after midday Ronaldo dropped me at the metro station Recife (does anybody know why this “train” is called “metro”?). I arrived at the Volunteer centre shortly after 1 o’clock. After some talks with my volunteer friends, and getting pictures from Sergio, I went to the SMC (Media Centre) to start my “working day”. It got to be one of the biggest disappointments I ever had in my “volunteering career”. Who knows, maybe this was the end of being a volunteer. Let’s see how it proceeds in the coming days, will then make up a mind about this kind of organization.
At 19:00 o’clock in Recife I got my first birthday wish. At 19:00? Yes, I was 51 already in my home countries, while I still was 50 in Recife. A “strange” experience, are U 50…. or 51?
This unsatisfying volunteer day should end at 22:00 hrs. We had a get together in the volunteer room of the Media Centre. But instead of reviewing the past day and looking forward to what we should improve for the match day, people left and came, certain people suddenly started to do something again, others were waiting to leave home, nobody was really organizing this team. The review / preview then started at about 23:00 o’clock, of course in Portuguese, getting us to reach the Volunteer Centre at 23:30, as last volunteer group. Thanks to one of my volunteer colleagues I could get home with her and with a taxi for the last kilometres, at 1:00am in the night I went to bed, totally demotivated, with some more mosquito bites and also very tired from the weather conditions over here, but knowing that I am now really 51.
Eingestellt von Unknown um 04:28